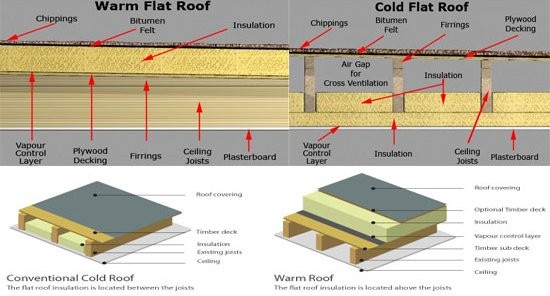 The cool roof system has “worked” in New Zealand for decades mostly by accident. If you have minimal insulation in the ceiling, then the coolness of your roof is really not that cool as the heat from inside the house heats the attic space. This heat continually dries the roof assembly minimising any condensation and moisture build up. No roof sheathing and metal clad roofs both allow warm air to accidentally escape thus magically no condensation problems.

Some time in the past few decades, people in NZ decided that being warm in their house was a novel concept and they started adding insulation in the attic (walls too but topic for another article). While keeping people warmer on the inside, this also reduces the amount of heat that gets into the attic, creating a cooler roof (still not that cool). As insulation increases, sheathing temperatures continues to decrease to almost the same as outside temperature (lets say -10C in Queenstown). Now that air migrating into the attic space has a lovely cold surface to condense and causes some problems ( mold, rot etc.) Bear in mind that NZ does not have any exterior passive attic ventilation requirements like North America does (because condensation hasn’t been a problem in NZ yet…*foreshadowing*).

So with the continuing trend of higher insulated roofs (unlikely that is going to go the other way), and cooler and cooler sheathing temperatures, how do you build an assembly to get to R4-R6 (R22-R34) without causing massive systemic condensation problems?

One way is to first minimise air entry into the attic with an air tight ceiling. If air does get into the attic, let it escape through ridge vents and allow outside air to enter at the soffits. This is the defacto method in much of North America for a cool roof assembly, but this method may also not work that well in some climates. In addition, all the challenges that creating an air barrier in a ceiling presents, alternative methods are required.

Another option for highly insulated roofs is a warm roof assembly. In this assembly, the air barrier is created from above rather than at the ceiling level. There are naturally less penetrations through the roof sheathing than through the finished ceiling a modern home meaning an effective warm roof air barrier may actually be feasible. This assembly also has less thermal bridging meaning more insulating value per inch. The air barrier can be created either be sealing a plywood sheathing layer, a taped roof underlay or taped rigid insulation could all work depending on the circumstances. Great assembly if done correctly.

The key to any roof or wall assembly is to make an air tight layer and then insulate that air tight layer. I suspect we’ll be seeing a combination of mould problems and unique roof assemblies as the trend to higher performance houses continues. Ideally, we would get ahead of the curve and prevent the looming attic mould epidemic but I’m not holding my breath.