Metal Roofs are a Sinking Ship on Mid-rise Buildings (but we can fix it); NZBS8 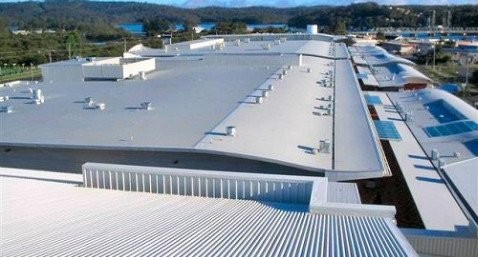 Kiwi’s love metal roofs. And what’s not to love? Highly durable (50+ years), long track record, cheap, UV resistant, easily installed, many competent installers in New Zealand, and they are pretty OK at keeping out water (which seems like a good idea for a roof). Not to mention the occasional midnight wake-up when a heavy rain storm that transforms your roof into a 100 sqm snare drum! Never gets old.

That being said, this traditional roof has its roots and performance history in small, poorly insulated houses. These have been homes with massive amount of heat loss and air flow through the attic space, low exposure to wind pressure and relatively short lengths of metal. When extrapolating this assembly to taller, larger, newer buildings, metal roofs require some careful foresight and design to ensure they perform as well as their miniature predecessors.

This article isn’t to say that metal roofs haven’t done well on taller buildings, in fact the opposite, there are many around that are doing fine. If you dig into the science behind them though, they have worked mostly by accident, not on purpose. Adding in a little bit of building science black-magic to an already good roof assembly can make something even more robust. Maybe this is a bit of ‘if it ain’t broke don’t fix it’ (in which case stop reading now and get back up on the roof) or maybe it’s being proactive.

This assembly as installed in NZ, relies almost entirely on the continuity of the metal cladding, screws, and flashings. It starts by taking a continuous piece of metal (pretty waterproof) and putting hundred of screws through it (generally not a good waterproofing idea). Actually, we put more screws through metal when it has higher wind pressures so the more exposed the system is, the more holes we put through it. It’s kind of backwards but its been working or maybe more accurate to say it hasn’t been failing.

The underlay below the metal is mostly to collect condensation from the underside of the metal as a result of interior air and vapour migration and ambient dew and if you’re lucky it will stop rain water too. Most of these underlays absorb (read: not drain) water that is later dried out. This drying mechanism is critical to the performance of these roofs. The performance of the underlay is dependent on air flow from the space below, air flow under the metal cladding and the heat of the building below. If you have a really drafty, poorly insulated house, this assembly can keep up with leaks from the exterior and humidity from inside. So a lot of the shortcuts and detailing that worked in the past, no longer work as well. Dry it out faster than it comes in, kind of like bailing out a boat (thus the sinking ship analogy begins).

Imagine you intended to actually comply with the building code and made the ceiling air tight (to comply with H1 requirements) and added heaps on insulation (to comply with H1) but keep the same amount of exterior leakage and ambient condensation. The balance of wetting to drying on that underlay layer tips away from drying towards the wetting side. Enough to cause a problem? That depends on how much wetting and drying. Back to the sinking ship analogy, this is the equivalent of having a smaller bucket to bail out your boat.

The wind is also pretty critical to the performance of roofs, because there are pretty significant forces to resist. A home in New Zealand (less than 3 stories) might be designed for uplift forces up to 1.82kPa in the highest wind zones. Push that roof up 2 more floors (and use NZS 1170.2 calculation instead of NZS 3604), and those pressures double to more like 3.5kPa. That’s an order of magnitude different, like taking your dingy you usually sail Sunday afternoon around Hermes Bay suddenly to Tonga.

If you were to set sail to Tonga in your dingy, you would probably want to take some sort of reliable back-up flotation. Where as puttering around the bay, you might just have just a life jacket but sailing on the open water would probably warrant something more like an inflatable life raft. In a metal roof, this back-up is your underlayment. Loose laid underlayment might be OK for your bach on Waiheke, but for a multi-unit residential building, you need something more durable, taped seams and probably a rigid layer like plywood.

Including a plywood layer under your metal roof can take most of the air pressure differential away from your underlayment. It’s the only way to reliably design a roof at pressures beyond 3.3 kPa because there aren’t any underlayments in NZ tested beyond that (that I’ve found, if you have one message me immediately). Actually most underlayments are just approved for about half that at the 1.82 kPa range (NZS 3604 Very High). If you tape all the seams, and do a good job maintaining the drainage plane (ie, not blocking it with battens!) any rain getting through the metal gets effectively caught and drained (and/or dried) away. If you use a lower rated, untaped, unsupported underlayment, the wind pressure across the underlayment can open up the laps bringing in the rain with it and may also tear in a big wind storm. Plywood is the catamaran of the roofing world that stabilizes every thing but is generally just for the big boys.

In reality, the metal cladding takes a good portion of the wind pressure away from the underlayment but how much is anyone’s guess. That’s the sort of calculation you can only prove through years of testing on dozens of in-situ samples to come up with some sort of formula, design guide or rule of thumb. It’s probably also going to depend a lot on the geometry of the building, the parapet, the gap between the metal and the underlayment, the profile of the metal, the direction of the wind and 10-12 other factors I haven’t even considered. Could be 10% less, could be 90% less or anything or everything in between. All that suffice to say that designing for the full wind load across the underlayment is admittedly conservative but in the absence of any other information is appropriate.

Metal expands when it’s hot and shrinks when it’s cold. How much it shrinks depends on how hot and cold they get, what metal they are made from and how long they are. On a larger roof, like you’d have on a larger building, the lengths are larger meaning more movement. At 10m long you start to have to worry about the expansion and contraction of metal. Any total expansion greater than 10mm requires oversized holes with sealed washers to allow the metal to move around, where less than 10mm you can take up the movement in the tolerance of the fasteners and direct fix through into the purlins below. Something as simple as the colour of the metal can influence the expansion and thus the fixing pattern. If you chose a dark colour metal around 10m, you could get expansions around 11mm, where a light colour metal, wouldn’t get as hot, and may only move 8mm. If you’re still following the sailing analogies, longer ropes and sails stretch more than short ones.

Metal roofs for big buildings require more thought than what you are used to on houses especially new roofs with air barriers and insulation. It really starts with a kick-ass underlayment (your life raft) that let’s you get away with a lot. An underlayment that can take the full wind load would let you increase the ventilation below the metal making up for the air and thermal improvements below getting your bailing capacity back-up to compete with the extra rain and wind you’re getting on a taller buildings. Good chance, you’ve been sailing with just a life vest on and maybe you get away with it. But maybe on the next one, that life raft underlayment saves your life. Next stop, Tonga!