NZBS #8: The Myth of Thermal Mass 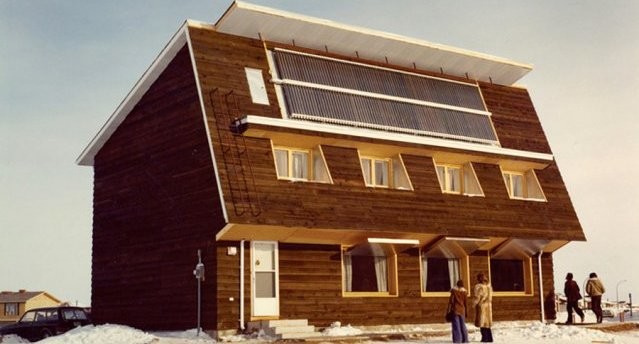 In Canada, in the 1970’s people started giving a crap about conserving energy in houses (it might be 2020’s before that catches on in NZ). At that time, and in the following decades, there were two competing ideas on how to do this best: Conserve as much heat as possible through super insulated air tight houses or the counter concept of passive solar heating, using the sun to heat the house and storing that heat in heavy things (‘superinsulated’ versus ‘mass and glass’). You can read many articles from people alive during those times (Building Science, Saskatchewan House), but to summarize decades of trial and error: the insulation option actually works (pretty damn well, and in any climate) and the passive solar thermal mass idea works almost none of the time (except a couple places with really nice weather, and only some of the time).

In fairness, both concepts have merit but you can do a good superinsulated house without the mass and solar part and you can do it anywhere in the world (it’s now called Passivhaus). But you can’t really do the passive solar thing without the insulation part and you need a really nice climate to begin with. Thermal mass is not the same as insulation; both are useful but for totally different reasons.

Insulation slows down heat transfer. The air (or blowing agent) inside the insulation is terrible at conducting heat so the heat on the inside of the house doesn’t cross the insulation. Funny enough, insulation doesn’t discriminate between summer and winter, so this insulation also keeps the hot summer days from coming into the house. That’s kind of what you want from a wall, to not be affected by what’s happening on the outside. You also need to think about the clear parts of the walls we call windows (NZBS6) but if you get the walls right you’re on the right track.

Thermal mass is different. Thermally massive elements conduct heat pretty well compared to insulation. 200mm of PUR insulation is about R-8, 200mm of concrete is R0.13. The difference is massive walls are thick. It takes a long time for the heat to get through the wall before you start losing it to the outside. This means they also take a long time to cool. This time delay is called thermal lag. The idea with thermal mass walls is the thermal lag balances out the hot and cold across a mean temperature somewhere in the middle. Great idea if it’s 24C during the day and 16C at night, you might balance out at 20 C all day. But if it’s a crispy 8C in Christchurch during the day and 2C overnight you’re not going to get the same effect. Aucklanders, you have periods of the winter in that same temperature range. The solar heat gain during the day in winter won’t make a dent in the temperature of a 200mm thick concrete wall at 4C. And if you turn the heater off at night, you’ll need hours and hours of heating to bring the walls back up to temperature.

For some reason, thermal mass is thought of in NZ as equivalent to insulation in many regards (probably because an energy model of one or 3 small houses said it was ok, so why wouldn’t it be for a 25-story apartment?). Per NZ 4218, you don’t have to insulate as much if you use massive walls (R2.0 vs R1.2 in Climate Zone 3). But this reduction comes with some huge caveats that are being ignored 1) this assumes there are other good elements of passive design included (ie. insulation, good glazing, orientation). 2) the mass has to be insulated on the outside and the mass exposed to the interior. If you miss those parts and insulate on the interior side of a large precast wall for instance, or put huge clear windows on the North elevation, you’re going to produce an uncomfortable, energy pig of a building. If you don’t want the insulation on the outside of your mass, then you can’t consider that wall a massive wall and R1.9 – R2.0 must be used on the interior side to meet the objectives of the building code (H1/AS1).

What does work pretty good is wrapping up your heavy wall in a blanket of insulation. The insulation protects the wall from the outside temperature variations so the heat and cooling loads on the heavy wall are reduced. Now the thermal lags peaks are not as dramatic and you could use this magical thermal mass reduction value and feel pretty comfortable year round. That’s the intent of that reduction, but I haven’t yet seen that wall built in NZ. Instead we see minimally internally insulated heavy walls being passed of a thermal mass walls to add precious square millimeters to 55 square meter apartments. But if no one is checking, why wouldn’t you?

The battle of mass vs insulation was fought in the 1970’s and 1980’s. Superinsulation emerged the victor but signs of the war still propagate through construction today. R-value reduction for thermal mass walls can only in the rarest of occasions be applied. Don’t believe the thermal mass hype, it only helps you if you already have a well externally insulated building. You can’t just rely on heavy things to keep you warm at night.