Building with Science #001: Many (almost all) Acceptable Solutions Don’t Meet the Building Code 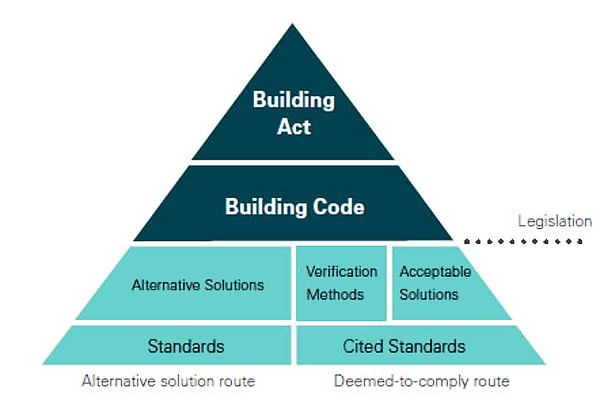 The building code in NZ is a 100% performance based code. And for people like me, it is awesome. Yes, I said it, it’s an awesome building code. You can do literally anything you want as long as you can prove it does the things we all expect building to do. The things we expect buildings to do are pretty simple to guess, so for people that understand what they are actually doing this gives you a wide open, free reign on designing the best buildings you possibly can, with almost no barriers.

However, it became apparent that such grand ideas like, “The building must not be damaged in an earthquake” and “The building should not let water in” and “People should be healthy and comfortable” was apparently too hard (and still too hard) for the lay-person to figure out. And there aren’t enough non-lay-people around to design every single building (but there should be). So at some point, a group of NZ Building Illuminati got together and gave everyone some recipes for how to build a building to do all the things we expect buildings to do, the Acceptable Solutions and Verification Methods (AS/VM).

Unfortunately, they got almost all of them wrong.

and this is what you are actually complaining about. Not the building code itself, but the bullshit AS/VM that someone came up with.

The code is neatly separated into the distinct things buildings need to do.

That a reasonable expectation of a building. We could start adding things like upfront carbon, environmental conservation, be pretty to look at, have fruit trees, but at the time (whenever that was) this seemed like a good starting point.

Now the big, big, big, big (maybe even huge) problem with designing to a predetermined solution is you might not always have the same question. In fact, that is a preposterous idea to even start with; how many buildings look the same? Unfortunately, none of them because architects need jobs too. So here comes the multi-billion dollar question?

What if an Acceptable Solution or Verification Method is wrong?

What if for instance clause C required flames not spread more than 3.5m and the acceptable solution said that doesn’t apply until your building is 10m tall. What if someone dies as a result of a fire spreading more than 3.5m?

What if for instance clause E3 said you have to provide a sufficient combination of insulation, heating, and ventilation to prevent fungal growth but the acceptable solution doesn’t require heating or ventilation?

What if for instance clause G4 says you need to collect and remove indoor contaminants like moisture, bacteria, particulate matter, products of combustion and the acceptable solution is to open a window? Is that collecting and removing?

What if for instance E2/VM1 and E2/VM2 try to prevent water from bypassing the exterior cladding layer, a design concept well proven to be impossible to achieve in practice, resulting in billions of dollars of leaky homes?

Now it gets even more interesting when an AS/VM doesn’t comply with another code clause. For instance G4/AS1 – open a window for ventilation. H1 (code requirement) to “limit uncontrollable airflow”. I’m no rocket scientist (like Jason Quinn) but opening a window is not limiting uncontrollable air flow, it’s encouraging it.

Or E3 that requires a sufficient combination of insulation, heating and ventilation to prevent condensation and G5 which says heating is required to prevent people from getting sick but then G5 also says that only applies to old folks homes and early childhood education. Well no, providing heat to every building is required to comply with E3 and G5, you just wrote down a thing to say it doesn’t.

or H1 that says you must take account of all these things that impact the energy use, like thermal mass, orientation, air tightness, local climate, solar radiation and H1/AS1 that ignores all of that and gives you some R-values to use and let’s you ignore 75% of the heat loss, the part due to thermal bridging and air leakage.

The law references the building code requirements; those wonderful, performance based objectives that every building, every where should meet. The Acceptable Solutions and Verification Methods are the dodgy dude on the corner, telling you ‘she’ll be right, trust me’, they might be legal, or they might land you in some big big problems when it all goes wrong. You need some serious scrutiny of these and what you’re trying to achieve. These AS/VM are a brutal example of designed in silos, number 8 wire approach to design. They aren’t coordinated, aren’t even good designs in isolation, and often very wrong about how they achieve building code compliance.

What we advocte for is #DesignAboveTheLine. Use that big brain of yours to understand what the hell you are designing and why it’s a good idea. Trust me, you are way, way smarter than the people that write Acceptable Solutions and Verification Methods. Or, you can hire those kinds of people to do thinking for you, we’re called consultants. The people that write these AS/VM think they are smarter than you and you couldn’t possibly figure this out yourself; that is ignorant and arrogant.

“But council won’t accept it”. Yeah they will. You just need to explain your solution in a way that council can be reasonably satisfied it meets the building code requirements. And if you can’t do that, and this is the test, then you probably don’t understand what you are designing and you should be asking someone for help. That person shouldn’t be the AS/VM section of the building code, it should be a suitably qualified and insured professional because, as stated above, many of the Acceptable Solutions and Verification Methods don’t meet the building code.